Can a small 10bps rate cut solve China’s growth problems? Nope. First, China’s slowdown is linked to unresolved real estate issues and the zero-COVID policy. Second, tiny rate cuts have less (or no) impact when interbank rates are already well below their benchmarks (this was our argument against China’s rate cuts). Third, July’s domestic activity numbers question China’s preference for supply-side stimulus (infrastructure), while demand side (consumption) remains an “orphan”. The start of Q3 looked weak across the board – with below-consensus industrial production, retails sales and investments – suggesting that the old policy playbook should be updated. Today’s newswires reported that authorities will be providing more liquidity support to select developers via guaranteed bonds. This can create opportunities for investors, but the impact on growth is still unclear. In the meantime, China’s 2022 consensus growth forecast keeps sliding down (see chart below).

Can a massive rate hike solve Argentina’s inflation problem by itself? Nope. On the surface, Argentina’s central bank is doing the right thing. In the past two weeks, it delivered a double-punch of rate hikes (800bps in late July followed by 950bps on Friday), bringing the total to 3150bps in the current cycle – by far the largest among major emerging markets (EM). Argentina’s effective policy rate now stands at 96.82% (!). However, the central bank cannot fight inflation alone, because the underlying problem is a lack of serious fiscal adjustment and the resulting “explosion” of monetary financing. An action plan proposed by Argentina’s new Economy Minister, Sergio Massa, did not do much to alleviate fiscal concerns – or concerns about external adjustment, for that matter.

Another country in dire need of a new policy playbook is Turkey. The central bank is “frozen”, despite annual inflation nearing 80%, and measures to stabilize the currency – largely unsuccessful – are putting more pressure on the balance of payments. These were the reasons why Turkey’s sovereign rating was cut again – moving deeper into non-investment grade territory – by Moody’s. Turkey’s policy agenda will feature more prominently in economic discussions as we are getting closer to the elections – market participants are watching this space. Stay tuned!

Chart at a Glance: China Growth Forecast - Still Down 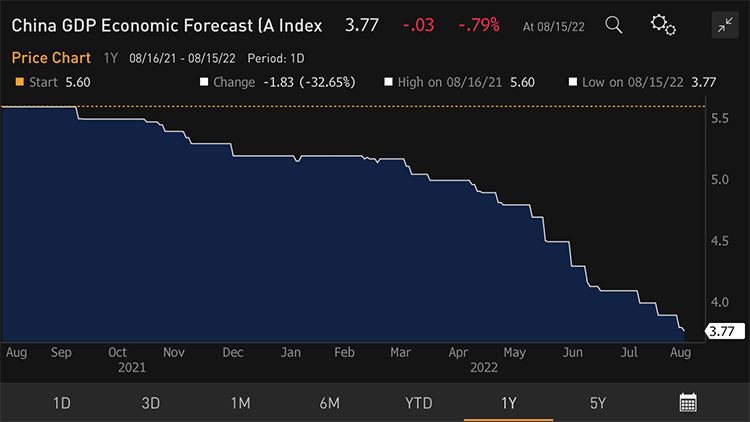 Aggressive rate hikes reflect well on EMs’ policy credibility. But would EMs be able to lead the global easing cycle without adverse consequences for economic fundamentals or asset prices?

Global growth concerns are back in focus after sizable rate hikes, even though the preliminary activity surveys for the U.S. turned out better than expected in September.