About Defaults - Russia and More? The U.S. Treasury closed the loophole (a special Office of Foreign Assets Control (OFAC) waiver) that allowed U.S. banks and individuals to receive bond payments from the Russian government. With Russia’s technical default looming, some commentators argued that this creates an international precedent that can complicate the lives of sovereign borrowers down the road. An aspect that might be more relevant in the near-term is the impact on Russia’s corporate debt, which is several orders of magnitude larger than sovereign debt. Yes, it is not huge as percentage of GDP, and it is very concentrated in several sectors, but broken financing and supply chains will push Russia’s potential growth trajectory lower in the coming years.

Russia is not the only emerging markets (EM) where the default drumbeat is getting louder. Several low-income (or frontier) EMs are either in distressed territory or getting close, being hit by exogenous shocks and rising global rates. The current EM High Yield spread (J.P. Morgan’s EMBIG Diversified HY Index) is the widest since 2002/03 (with the exception of the global financial crisis and the pandemic crisis – see chart below). By contrast, EM Investment Grade spread (J.P. Morgan’s EMBIG Diversified IG Index) is still close to historic lows. Of course, individual countries’ circumstances are different (EM is not a monolith), but if the current trends continue, we expect to hear more calls to extend the G20 Common Framework for debt treatment. From the investment perspective, it is also important that several countries in this group are talking to the IMF about new programs and loans – disbursements and news about structural reforms tend to improve sentiment and compress spreads.

And talking about rising global rates, the U.S. Federal Reserve’s (Fed’s) minutes will be scrutinized this afternoon for signs of either confirming the +50bps pace of rate hikes or perhaps expanding it to +75bps. It’s not just “we the market” who are watching the Fed – many EM central banks do the same (despite being way ahead in the current tightening cycle). Mexico’s deputy governor, Jonathan Heath, said yesterday that they cannot decouple from the Fed and might need to widen the policy rate differential in order to maintain restrictive stance. Stay tuned!

Chart at a Glance: “Fragile” EM Spreads Are Widening 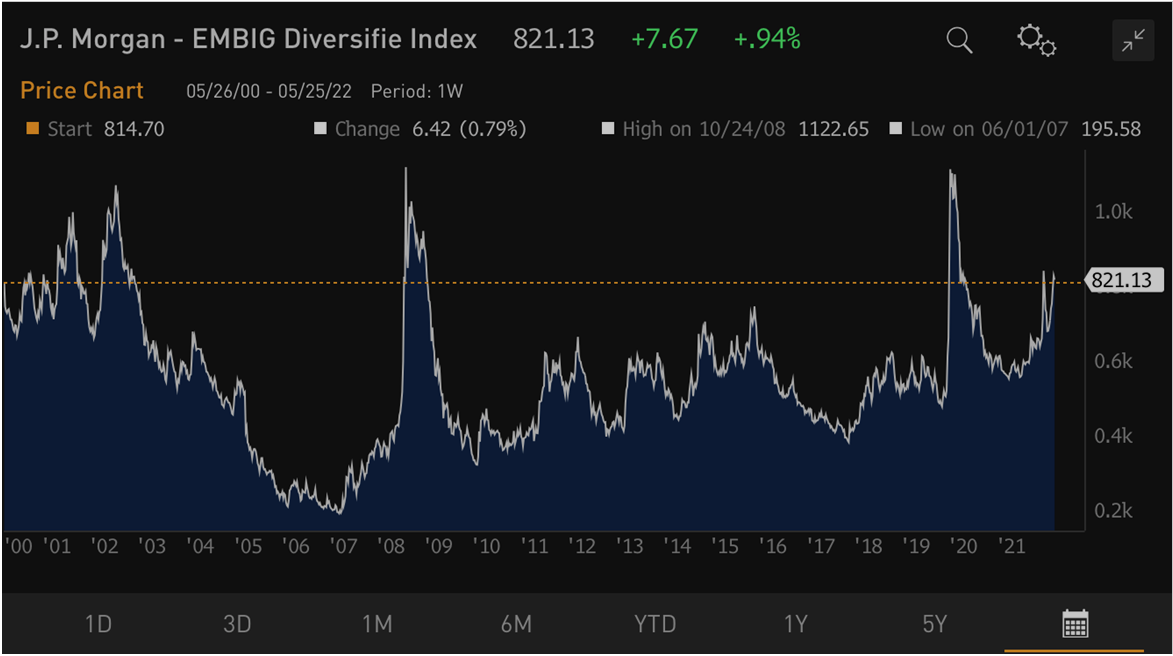 We continues to get upside growth surprises in EM - the question is whether they are going to last as activity surveys in several major economies are flashing red.

Headline inflation appears to be peaking in several EMs. What are the main drivers, and is there any collateral damage elsewhere in the economy?

Recent changes in inflation and growth surprises are making emerging markets to re-evaluate their policy options.