China’s cyclical downturn may have further to run. Is it time to expand the policy tool-kit beyond tried and tested infrastructure investments?

“Policy mis-calibration” was among the key risks mentioned in discussions about China’s cyclical downturn during the IMF Spring Meetings in DC. The latest activity gauges are likely to add fuel to these concerns. The official manufacturing Purchasing Managers Index (PMI)1looked weak, dropping to 47.4 in April, but the services PMI’s surprising decline to 41.9 (see chart below) shows that the zero-COVID policy is having a disproportionate impact on consumption. Two other details that caught our attention are (1) a sharp move into contraction zone by the activity gauge for state-owned enterprises (48.1), and (2) a sharp deterioration in the new export orders PMI (41.6). This tells us that the two growth tailwinds (external demand and state-run manufacturing) that helped a lot during the initial recovery stage might be failing and becoming growth headwinds.

China does have policy room (both fiscal and monetary) to support growth. But authorities’ focus on supply-side measures – while being reluctant to dispense more demand-side stimulus – looks increasingly misplaced, especially as China does not have an inflation problem. The latest Politburo meeting did mention tax cuts and rebates, as well as policies to help small and medium-size enterprises (in order to prop up employment, and hence, consumption), but this almost sounds like an afterthought to infrastructure investments.  What would it take for authorities to reconsider? The services PMI dropping below 40 in May?

China’s growth concerns weigh on the renminbi – the offshore spot exchange rate weakened by another 52bps this morning. The pace of depreciation might look small compared to changes in other asset prices. However, the renminbi is the anchor for several other emerging markets (EM) currencies (first and foremost in Asia, but not only), and FX weakness these days often means unwanted inflation pressures. We keep an eye on the next batch of China’s credit and monetary aggregates next week for signs of stabilization in the housing sector – it is a well-known fact that housing prices have an impact on consumer confidence. Stay tuned!

Chart at a Glance: China Activity Gauges – Moving in the Wrong Direction 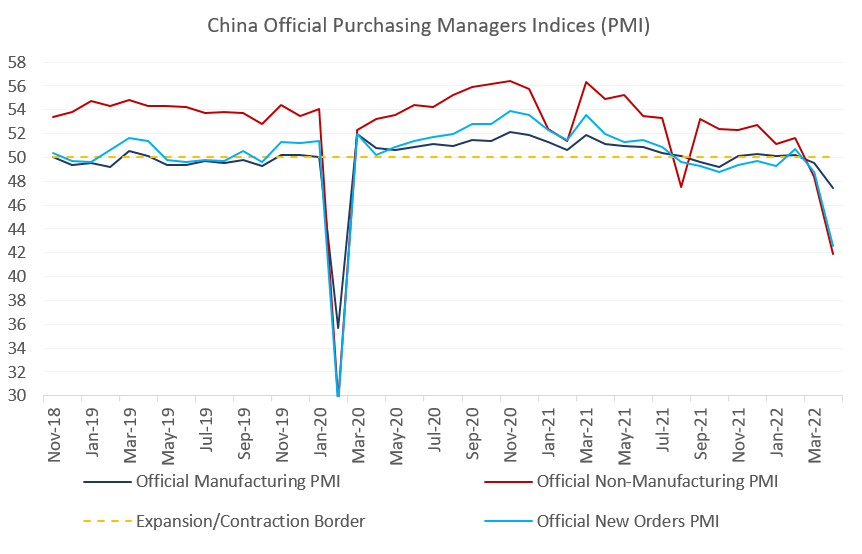 China - Growth Slump Is Over?

China’s latest PMIs shows that the stimulus started to work its way through the economy. Details call for continuing support, and the new official growth target will signal how much more authorities are willing to disburse.

The widening gap between activity gauges for China’s small and large companies call for more targeted policy support, but also draws attention to the efficacy of the current policy mix.

China - Growth Slump Is Over?

China’s activity gauges signal that the near-term growth outlook remains problematic. The government has plenty of fiscal space to address the issue – will it use it or ideology will dictate otherwise?

China’s activity gauges signal that the near-term growth outlook remains problematic. The government has plenty of fiscal space to address the issue – will it use it or ideology will dictate otherwise?